Once such fuels as petroleum and natural gas are burned, it can no longer be used. In contrast, uranium fuel continues burning for three to four years and can be used repeatedly through reprocessing. In the light-water reactors used in many nuclear power plants, energy is primarily obtained from U-235, whereas, when U-238 absorbs neutrons, part of it changes into plutonium.

The plutonium and residual unburned U-235 is extracted by reprocessing for reuse as raw materials for uranium fuel or Mixed Oxide (MOX) fuel.

This reprocessing is done at the reprocessing plant. Thus, the reprocessing plant may be considered to be "a site where semi-national energy resources are generated". Using reprocessed uranium and plutonium in a light-water reactor allows for 10% to 20% uranium-resource-saving effects. Moreover, in the future, if plutonium were to be used in the Fast-Breeder Reactor that excels in conversion efficiency, utilization efficiency can be expected to improve significantly.

The Rokkasho Reprocessing Plant is the first commercial reprocessing plant in Japan. The Plutonium Uranium Reduction Extraction (PUREX) process introduced to this plant has proved high performance in Japan and abroad.

To reduce the proliferation risk, the Rokkasho Reprocessing Plant adopted the Plutonium-Uranium Co-extraction Technology that combines recovered uranium with separated plutonium before denitration. Through this process, plutonium is recovered as uranium-plutonium mixed oxide (MOX) at the end of the process, so that the plutonium is never recovered on its own.

The maximum capacity of the plant is 800 ton-U/year, enough to reprocess spent fuel produced from about 40 reactors at 1,000 MW class nuclear power plants.

Progress of the Reprocessing Plant up until now

We started constructing the Reprocessing Plant in 1993. After undergoing the water flow operational test, the chemical test and uranium test, currently the plant is in the final stage of the active test. In spite of facing various difficulties until now, we have brought together knowledge and technology and have gotten over several difficult situations. Leveraging our past experiences, we will devote ourselves entirely towards the completion of the Reprocessing Plant, which is pivotal to the Nuclear Fuel Cycle.

Development of the new vitrification technology 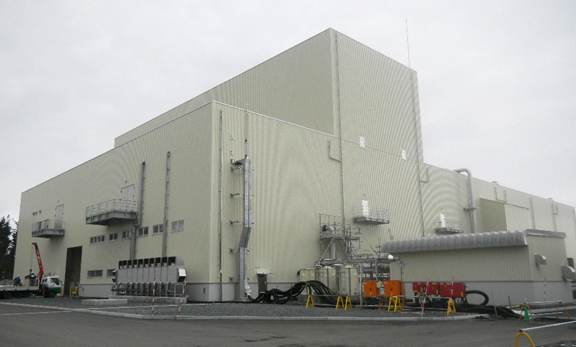 From the southwest direction of the building 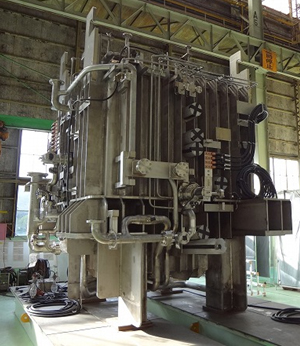 Currently, the Reprocessing Plant is in the stage of "Final Commissioning-Test" and planned to complete its construction in the first half of FY 2022.