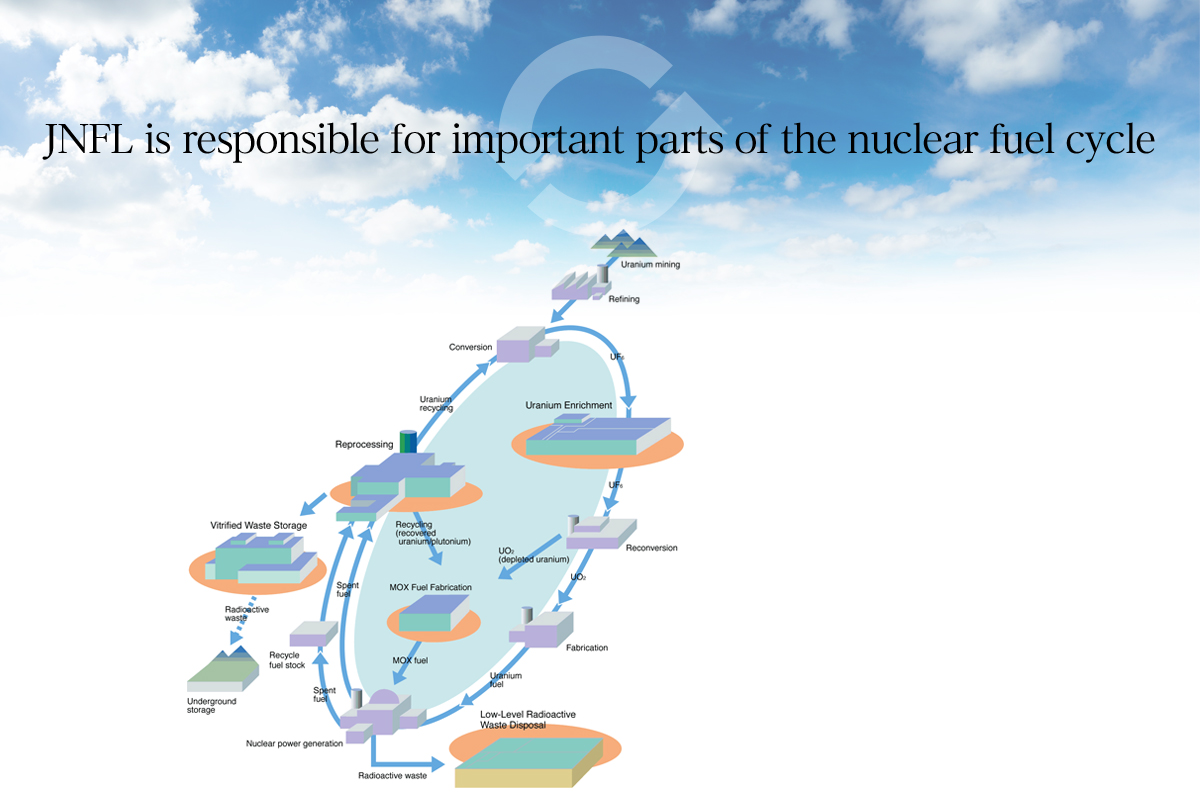 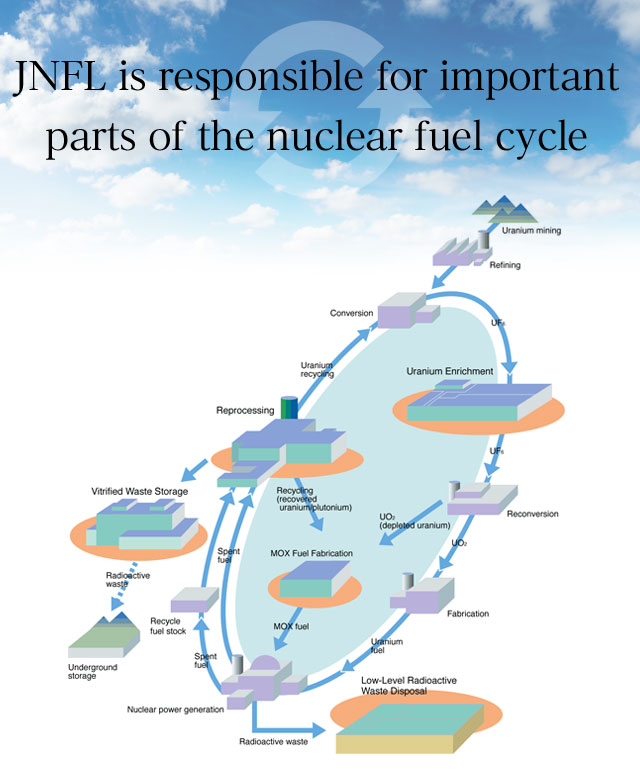 What is the nuclear fuel cycle?

With dependence on foreign energy resources, Japan made closing the nuclear fuel cycle a key element of its energy security.

It is an important energy strategy for the future of Japan, a nation with limited natural resources, to aim to ensure stable supply “Energy Security”, and realize “Economic Efficiency” on the premise of “Safety”, as well as to pursue “Environment” suitability (3E+S). The strategic energy plan decided by the Japanese government in 2014 recognizes nuclear power as an important base-load power source, and the government promotes the nuclear fuel cycle.

What is the significance of the nuclear fuel cycle?

A closed nuclear fuel cycle provides Japan with a long-term solution to its energy strategy.

1. Production of a semi-domestic energy resource

It is extremely important for Japan, a resource poor country, to establish self-sufficiency in energy.

Although Japan produces a mere 6% of its energy domestically, and reprocessing spent fuel can produce MOX, a semi-domestic energy resource created from spent fuel.

About 96% of spent fuel is uranium and up to 1% is plutonium.
These materials are valuable resources and both can be recycled as MOX fuel,
saving 10 to 20% of the natural uranium in the nuclear fuel cycle with light water reactors. 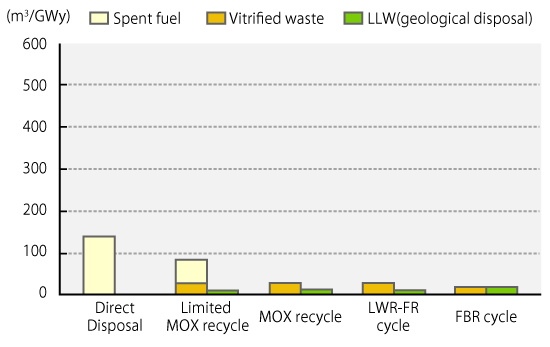 The FR case assumes that FR and LWR exist
at the ratio of 1 unit to 2.7 units.

Figure 1: Volume of HLW (spent fuel and vitrified waste) and LLW per unit of electricity generated

Potential harmfulness of HLW(1) in vitrified form is to be 1/8 of direct disposal. 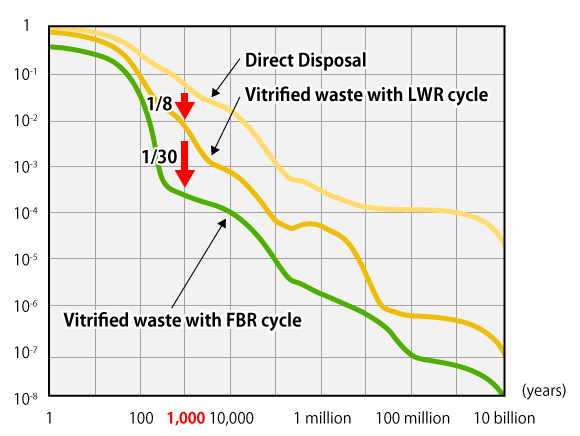 Figure 2: Potential impact of radiation from HLW against the same amount of power generation (Note )

(Note ) Barriers between HLW and human being are not considered. This graph shows a potential harmfulness (It is standardized on annual limits of oral ingestion.), not an actual dangerousness.

Power Generation Cost of each Power Source in 2014

Note 2: As for geothermal power, the budget for development and promotion constitutes a major part of policy expenses, which makes comparison with other power sources difficult. Related costs are automatically deducted from the total power generation of 1,430,000 kW (including that of projects in the planning stage), the results of which are shown here.

Nuclear power generation costs are estimated taking into account costs directly related to power generation, future costs regarding decommissioning, nuclear fuel cycle (including final disposal of radioactive waste), etc., costs for dealing with accidents (including damage compensation, decontamination), as well as government expenditures including costs for policy measures such as location grant, and R&D including those for the Monju Nuclear Power Plant, etc. 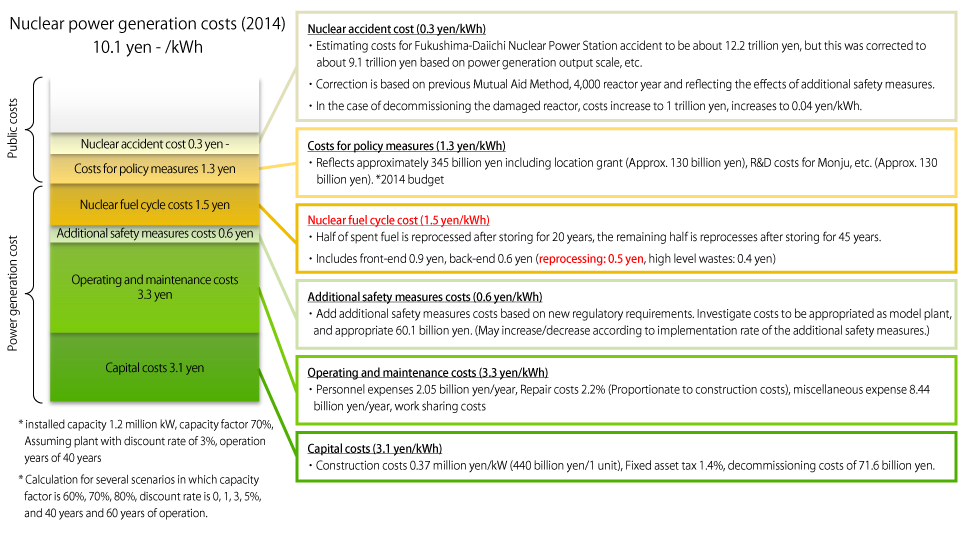 Plutonium separated from spent fuel through reprocessing is recovered as MOX, oxide material mixed with uranium. After the step of fuel fabrication, MOX fuel is used at domestic nuclear power plants. It is planned to be fully consumed at light water reactors under the plutonium utilization program in Japan.

At the Atomic Energy Commission on March 26, 2013, the Federation of Electric Power Companies of Japan announced that utilities will clarify the plutonium utilization plan before the recovery of plutonium will be resumed at Rokkasho Reprocessing Plant.

JNFL will continue maintaining the transparency of plutonium utilization to foster understanding and confidence in Japan’s peaceful intentions both domestically and internationally.

In recognition of the importance of securing nuclear non-proliferation throughout research, development and utilization of nuclear energy, the Japanese government has strictly controlled all nuclear materials and activities, putting it under the IAEA (International Atomic Energy Agency) safeguards in accordance with the Nuclear Non-Proliferation Treaty (NPT). Especially for plutonium, the Japanese Government maintains the principle of not possessing plutonium reserves whose purpose of utilization is unspecified. In order to assure its transparency domestically and internationally, Japan has published the status of plutonium management including usage and stockpile both within and outside Japan since 1994. Japan has also annually reported the status to the IAEA in conformity with the “Guideline for the Management of Plutonium.”