Safeguards for assuring peaceful use of nuclear energy

Peaceful use of nuclear energy

Japan, which is the only NPT non-nuclear weapon state that possesses the nuclear fuel cycle program under the "Atomic Energy Basic Law" that allows only peaceful nuclear activities, and its "Three Non-Nuclear Principles" of not possessing, producing, or permitting the introduction of nuclear weapons into the country, in line with Japan’s Peace Constitution.
Japan embraced the NPT as a public commitment to use nuclear materials and technology only for peaceful purposes, and all the nuclear facilities are under the IAEA Safeguards based on the NPT.

The objective of safeguards measures under Comprehensive Safeguards Agreements is the timely detection of diversion of significant quantity of nuclear materials from peaceful nuclear activities to the manufacture of nuclear weapons or of other nuclear explosive devices or for unknown purposes, and the deterrence of such diversion by the risk of early detection.

"Significant quantity" is defined in the IAEA Safeguards Glossary (2001 Ed.) as the approximate amount of nuclear material for which the possibility of manufacturing a nuclear explosive device cannot be excluded: for example, 8 kg of plutonium or U-233, or 25kg of enriched uranium containing over 20% or more of U-235.

For Japan, the broader conclusion(note) was drawn at the meeting of the IAEA Board of Governors in June 2004. The application of Integrated Safeguards began on September 15, 2004.
Japan was the first country conducting large-scale nuclear activities to which the Integrated Safeguards were applied.

The application of Integrated Safeguards warrants the high transparency of Japan’s nuclear activities, but is also expected to reduce the burden on its safeguards implementation. In addition, the IAEA is reviewing the development.

Statement by the Press Secretary/Director-General for Press and Public Relations, Ministry of Foreign Affairs, on the Implementation of Integrated Safeguards by IAEA to Japan's Nuclear Activities, September 14, 2004

In addition, inspectors are stationed in shifts at the Rokkasho Reprocessing Plant for 24 hours while the plant is in operation.

In order to establish the effective and efficient safeguards at RRP, the safeguards discussions with the IAEA was initiated in 1988, but at that time no available model or guideline that could be used as a reference. Therefore, during the period of 1988 through 1992, a multinational forum, referred to as “LASCAR” (Large Scale Reprocessing Plant Safeguards) participated by US, UK, Japan, French, Germany, IAEA and EURATOM), provided the recommendations how effective safeguards approach could be implemented to a large scale reprocessing plant with maintaining efficient uses of resources.

Automatic Verification Systems such as VCAS, WCAS and PIMS and Process Monitoring Systems such as CRD and SMMS realized a continuous inspection regime that was required as the safeguards approach to the Rokkasho Reprocessing Plant. (See Figure 1)

These advanced safeguards technologies are introduced along the flow path of the nuclear materials in the whole process, including the nuclear waste treatment process and product storage.

A combination of above systems ensures credible safeguards activities at the Rokkasho Reprocessing Plant. 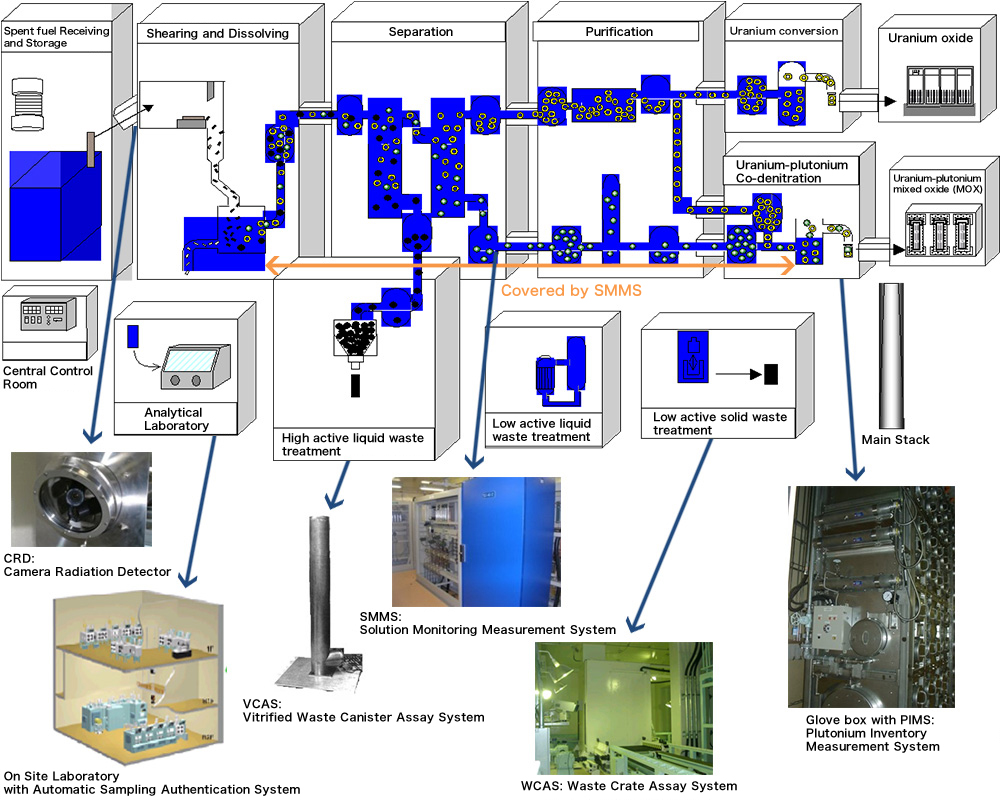 IAEA and JSGO have developed and introduced the Integrated Inspection Information System (I3S). The I3S collects inspection data from all the safeguards systems automatically to support evaluation of inspections and diagnosis of safeguards equipment.

Near-Real Time Material Accountancy (NRTA) is implemented for timely detection as an advanced nuclear material accountancy technique. The application of NRTA for short-period sequence analysis provides for early indication of the diversion. 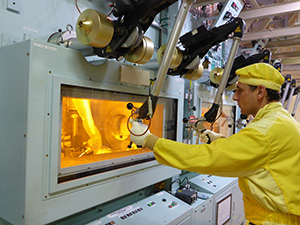 Analysis operation by IAEA at OSL

IAEA and JSGO are jointly setting up their own on-site laboratory (OSL) in the Rokkasho Reprocessing Plant. OSL provides timely analytical results incorporated with the Automatic Sampling Authentication System.
It also allows IAEA and JSGO to identify questionable results.