The gas and liquid radioactive waste generated in nuclear fuel cycle facilities is discharged after ensuring that is emissions are sufficiently safe.

To ensure the environmental safety of the surrounding area, JNFL has performed environmental monitoring since before the construction of the Rokkasho nuclear fuel cycle facilities.

As for the Rokkasho Reprocessing Plant, liquid waste are discharged after removing radioactive materials as much as possible, by distillation using evaporator, and also going through filters. And for gaseous waste, it will be discharged after removing radioactive materials using high-performance particle filter or iodine filter.

We make it a rule to release these remaining radioactive substances into the sea from a marine discharge pipe installed at a depth of some 44 m at a point around 3 km away from the shore or from an exhaust stack that is approximately 150 meters high.

This ensures that these substances are substantially dispersed into the air or diluted significantly by the seawater so that the dose to which the general public is exposed can be reduced to an acceptably low level.

Assessing the impact of radioactive materials

The impact of radioactive materials discharged from the Rokkasho Reprocessing Plant was calculated to be approximately 0.022mSv/year based on the assumption that the maximum amount of spent fuel capable of being processed (800 ton-U/year) is processed. A government safety inspection has confirmed that this level of discharge falls far below the dose limits stipulated for the general public (1mSv/year).

This calculation is also based on the assumption that one human being was subjected to radiation from all realistically possible routes, such as breathing, the consumption of livestock and marine products, and engagement in fishing activities. 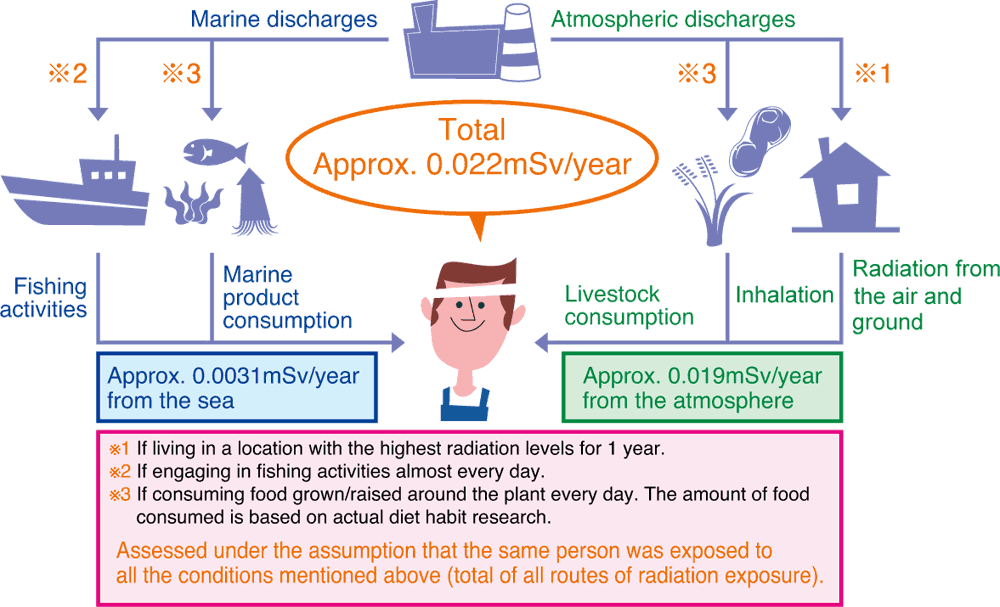 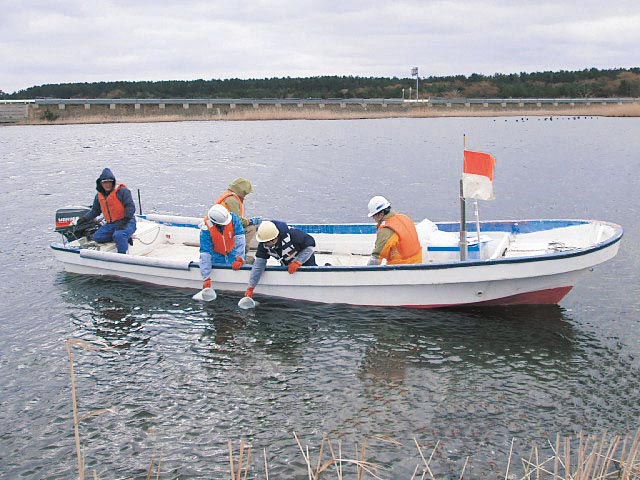 Everyone comes in contact with radioactive materials on a daily basis because it exists naturally in the environment. We are subjected to a world average of approximately 2.4mSv/year through daily activities such as breathing and consumption of food. 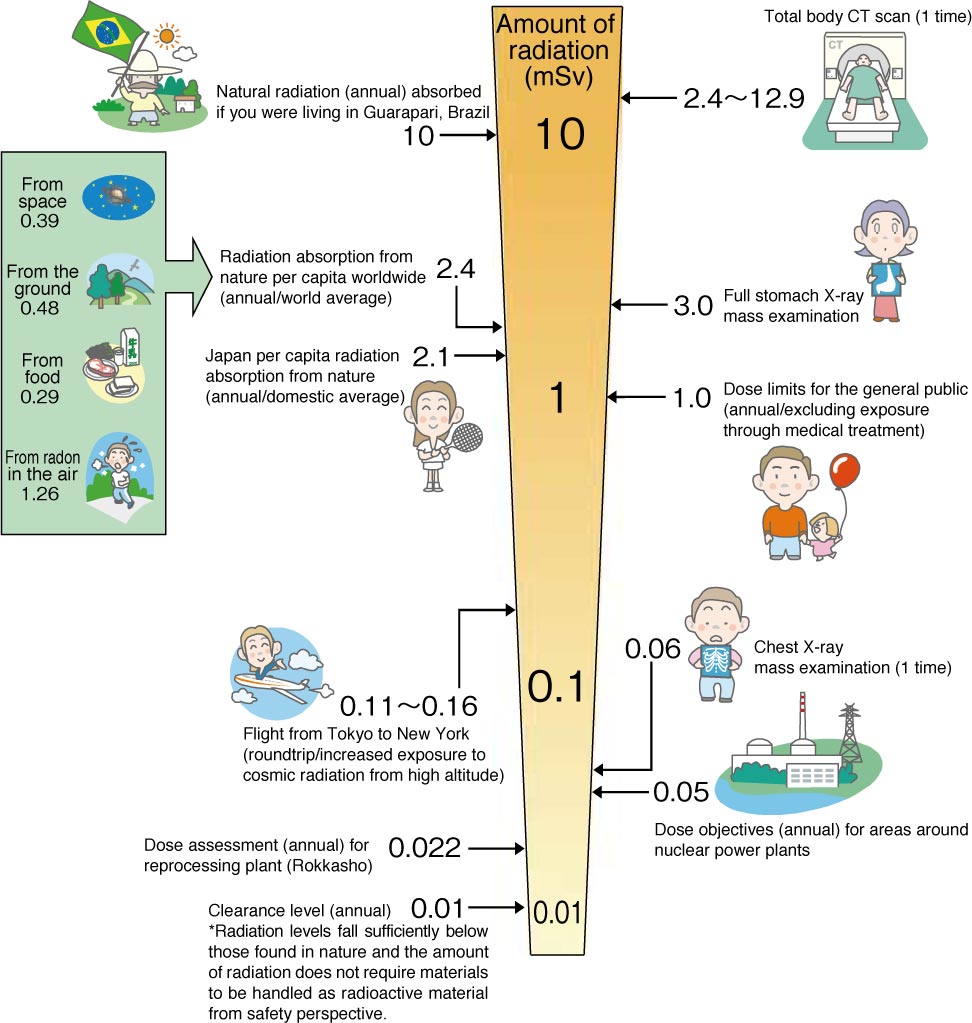 [Question 1]
What kind of unit is used, when you talk about impact on the human body?

[Question 2]
What will be the radiation impact on the human body influenced by the release of the radioactive material from the Rokkasho Reprocessing Plant. Do you carry out an environmental impact assessment in advance?

The radiation impact on the human body is evaluated to be around 0.022 millisieverts annually, based on the estimated annual amount of radioactive materials released from Rokkasho Reprocessing Plant during maximum 800t/y operation. This level is falling far short of the statutory dose limit for individual public.(1 millisievert per annum) For reference, usual chest X-ray examination is estimated to be 0.05 millisieverts per each exposure.

The Rokkasho Reprocessing Plant does not fall into the category of business operations as prescribed by the Environmental Impact Assessment Law, commonly known as the Environmental Assessment Law, but construction of this facility was commenced after an environmental protection survey was carried out, and an Application for Designation as a Reprocessing Business was filed with the regulatory authorities in accordance with the "Law for the Regulation of Nuclear Source Material, Nuclear Fuel Material, and Reactors." This plant was duly designated as a reprocessing business following a prior safety review.

[Question 3]
Isn’t it hazardous for human body to discharge large volume of radioactive materials from the reprocessing plant?
What is the difference between the domestic nuclear power plants.

The evaluated impact of radioactive material discharged from Rokkasho Reprocessing Plant to human body is approximately 0.022 millisieverts annually, which is a level substantially lower then the statutory dose limit for individual public.

In the case of domestic nuclear power plants, it is approximately 0.014 millisieverts, both well under the statutory dose limit.

[Question 4]
In case of environmental contamination caused by the discharge of radioactive materials from reprocessing plant, worries on impact to human body and foodstuffs arise.

The Rokkasho Reprocessing Plant uses the best available domestic and foreign technologies to remove hazardous radioactive materials. Some radioactive material which has negligible impact on the human body, such as krypton-85, carbon-14 and tritium will be discharged into the air or the sea.

Although, these materials are also naturally existing radioactive materials and even if they are absorbed into the body, they will be readily excreted through normal metabolic processes.

Rice and other foodstuffs also contain naturally existing radioactive materials, such as potassium-40 and carbon-14. By taking them into our body through foodstuffs, we are exposed to radiation of around 0.3 millisieverts (the world average) annually.

Radioactive material released by the Rokkasho Reprocessing Plant are figured out to have some effects on the radiation levels of polished rice, fish and shellfish and the like. But these effects are estimated to represent a dose equivalent of around 0.022 millisieverts per annum, a level much lower then the statutory dose limit for individual public, 1 millisievert a year. This was confirmed by the National Safety Review.

[Question 5]
What are the effects of radioactive materials released by the reprocessing plant on the ocean, the air and farm products?

The obtained data are all well under the statutory dose limit, and no infection observed.

Since 1989, before the construction of the facility, we have been continuously monitoring the radiation dose rate in the air, using monitoring stations in order to check the possible effects of radiation on the environmental surrounding the nuclear fuel cycle facilities and at the same time, we have been analyzing and measuring various samples of cow's milk, rice, marine and agricultural products taken at regular intervals. The findings were discussed and evaluated by the Aomori Prefecture Council for Monitoring and Assessment of the Environmental Radiation in and around Nuclear Installations (this council meets each quarter), which is composed of radiation experts and representatives of related local organizations such as agricultural and fishing cooperative associations, and the results of this assessment are announced in the "Monitoring Tsushin Aomori" a newsletter published by Aomori Prefecture.