Natural uranium consists primarily of U-235 and U-238. When neutrons collide with U-235, it emits huge amounts of energy through a fission reaction, whereas U-238 is less fissile than U-235.
Since natural uranium are contains only approximately 0.7% of U-235, isotope separation (uranium enrichment) is needed to increase its content to 3 to 5% to be used as fuel for light water reactors.

JNFL has a plan for the Uranium Enrichment Plant to provide for an ultimate capacity of 1,500 ton-SWU/year.

The concentration of U-235, with which nuclear fission occurs, is increased from approximately 0.7% to 3-5%. Enrichment methods include the gaseous diffusion process, the laser enrichment method, and the centrifuge process, which JNFL uses. 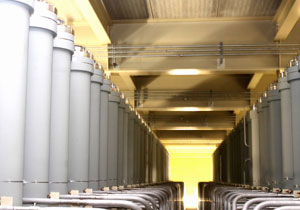 Cascade room where centrifuges, linked with each other, are placed 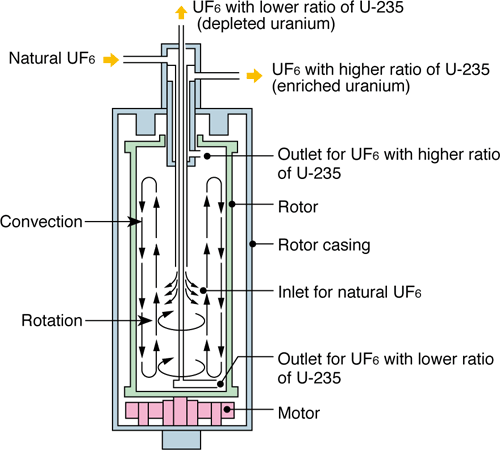 Diagram of a centrifuge

Feeding a gaseous uranium compound, uranium hexafluoride, into a rapidly spinning rotor of a centrifuge separates U-235 and U-238. The heavier isotope, U-238 is pushed outward, while U-235, the lighter isotope, gathers at the center of the rotor. Gas with the higher U-235 concentration is drawn off and sent to another centrifuge. Repeating this process several times produces uranium with increase U-235 content. Using this method, JNFL developed an advanced centrifuge with high efficiency and safety, based on the Japan Atomic Energy Agency’s technology.

Up to now, total of 1,702 tons of low-enriched uranium were shipped.

The half of remaining 37.5 tSWU/year portion has commenced its commercial production operation on May, 2013.