Change in Schedule for Completion of MOX
Fuel Fabrication Plant

On December 9, 2020, Japan Nuclear Fuel Limited (JNFL) received the permission from the Nuclear Regulation Authority (NRA) for the amendment of business permit for the MOX Fuel Fabrication Plant (MOX Plant) to comply with the new regulatory requirements. By this permission, the strengthened safety measures to comply with the requirements were established for MOX plant and construction works schedule required in the future was examined and considered.  Consequently, JNFL decided to change the completion date of MOX Plant from the first half of the Japanese Fiscal Year (FY) 2022 to the first half of FY 2024.

1．Reasons for Change in Schedule for Completion of MOX Plant

In December 2013, NRA established new regulatory requirements for nuclear fuel cycle facilities including MOX Plant.  JNFL decided to introduce additional or strengthened safety measures such as installing fire protection equipment to MOX Plant and enlarging capacity for the additional equipment to comply with the new regulatory requirements.  In parallel, the safety reviews by NRA for the Rokkasho Reprocessing Plant were ongoing, and, in the summer of 2019, further additional safety measures for MOX Plant had to be considered following the progress of those for the reprocessing plant.  In consequence, as the volume of construction works of safety measures increased and the prospects of restart of construction works were obtained, JNFL decided to change the schedule.

The foundation of the main building of MOX Plant has already been laid; therefore, JNFL had to consider the layout of additional safety measures and other equipment.  In particular, the location of equipment, piping routes, wall penetrations, and seismic supports have been considered carefully because of the increase in safety measures.  This led to increases of quantity of materials for piping and seismic supports.

JNFL re-examined the construction schedule, placing the highest priority on safety, and taking into account future applications for the approvals of design and construction plans, licensee’s pre-service inspection, and NRA confirmation for licensee’s pre-service inspection.  JNFL judged these steps would take about 2 more years from the first half of FY 2022, moving the new target for completion to the first half of FY 2024.

2．Steps toward Completion and Operation of MOX Plant

Future steps for the completion and operation of MOX Plant are as follows:

● Applications for the approvals of design and construction plans

● Activities toward the completion of MOX Plant

JNFL will proceed with construction works, placing the highest priority on safety, and implement necessary preparations such as training of operators, to ensure the safe and stable commercial operation soon after the completion of the plant.  JNFL will assure local communities of the safety and reliability of the plant. 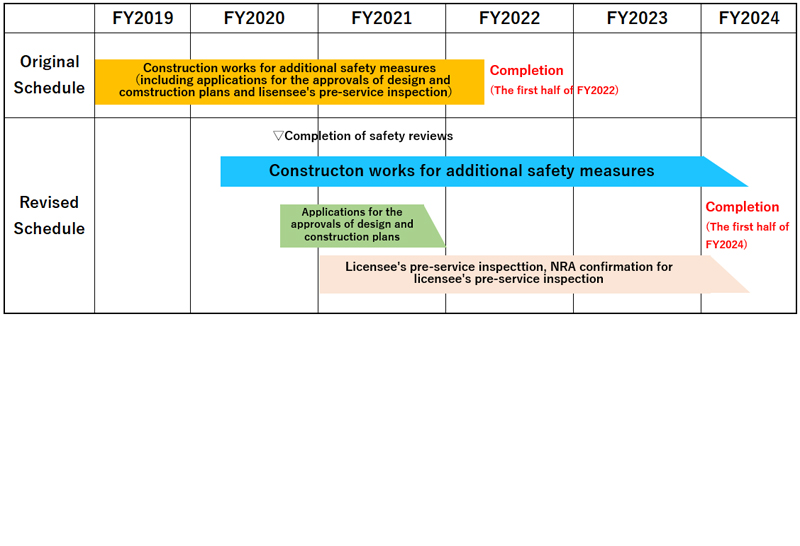